Home
Everything Entrepreneur
How Ecstatic Dance in Bali Changed My Life 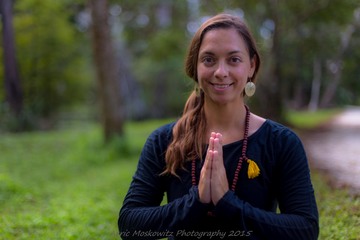 Before you imagine me as a shy wallflower, lurking meekly in the shadows when music is playing, rest assured that is not me. I happily dance at live music gigs. I float around merrily at festivals. I’ve busted a move in my kitchen and in the middle of a grocery store aisle.

For the uninitiated, let me explain: Ecstatic dance events are organized often through yoga studios as an invitation for participants to enjoy free-form expressions of movement with minimal instruction and great music.

The lights are low. It’s usually really hot. Good ecstatic dance events have scores of people, enough to fill a room but not so many that you don’t have the space to move your limbs. These events are often held in the evening.

There’s no chit-chat on the dance floor. There’s no bar selling alcohol to “loosen you up.” No one is popping pills like at some ’90s rave. Whether you arrive alone or with friends, it’s not about hooking up like at a nightclub. Besides no cameras and no bothering others, there aren’t any rules.

I discovered ecstatic dance upon arrival to Bali, where I decided to live after nearly four years of travel to four continents and throughout the Caribbean. After leaving the U.S. via sailboat, I am now a full-time nomad with no home base.

I travel solo most of the time. As a yoga teacher and energy worker, I’m always searching out events to connect with a community of like-minded people intent on living in high vibrations and alternative health. I read how popular these ecstatic dance events were, so I thought I’d check it out.

It’s true, I love to dance. It’s not like I have any formal training. When I was in second grade, my parents signed me up for a year of ballet lessons. In fourth grade, a friend with an extra pair of tap shoes (conveniently in my size) taught me the old shuffle-ball-change.

We debuted our little act as part of a class performance. I was lead in a few plays throughout my school years, but my dance experience is amateur, at best.

In fact, like so many, I had always struggled with my relationship with my body. I’ve always held on to a couple extra pounds, adding some curves that were never an issue with men but made me look enviously at those naturally thin women whose genetics were quite unlike my Italian-German-Swiss meld.

When I became a yoga teacher five years ago, I was acutely aware that I did not necessarily fit the yoga teacher mold.

Yet, I studied the spiritual texts and found that I had a lot to teach. I also noticed a lot of emotional baggage I had to drop. I was still holding on to some of it when I arrived at my first ecstatic dance event.

Held at the famous Yoga Barn in Ubud, the Friday night event is so popular that you have to arrive two hours early to stand in line for a number, which you can then exchange to buy a ticket. The place was packed and hot. Dressed in a bikini top and flowing pants, I spent two hours in constant, sweaty movement.

But I also felt a little out of place: There was a large clique of friends in attendance, and they were dancing with each other. I saw two guys who I “swiped left” on in Tinder.

Two girls were writhing around on the floor, making a sexual spectacle. There was an overarching feeling of it being a middle school dance without any chaperones.

The DJ played “Jump Around” by House of Pain, even. I noticed how my mind judged people, judged the music, judged the vibe – and how I feared others were judging me. I exhausted myself in movement. I wanted to do it again.

A few days later, in Canggu, I signed up for the Thursday night dance at Samadi Yoga. This was when I let go of judgment.

With fewer people and less pretense, the DJ began to play a cool mix of tribal beats and ambient rhythms. I arched my back, raised my hands to my heart and stretched my arms so that my palms opened into an outward burst.

I was feeling my heart opening. I had more room to move here, and I did: leaping across the corners of the room, throwing my body in modern dance style, jumping up and down and twirling. Then I wrapped my arms around myself and hugged tightly. I felt tears swell.

Some people on the dance floor were shuffling shyly back and forth at first, taking a longer time to feel comfortable dancing. Some people were on the floor in child’s pose, barely swaying and focusing their energy within. Others were making grand movements, winding their way around the space. When I made eye contact with fellow participants, we smiled at each other.

Ecstatic dance is being fully in the moment. My friend called it “Dance Yoga.” No one is holding up cameras, taking selfies. It is a practice: the practice of feeling good, owning your own body and expressing yourself.

I found that as I danced with intention, sometimes I would have a serious look on my face. So, I would make myself smile again.

The more I smile and encourage myself to be playful, the more I do so naturally. I was consciously deciding to feel good – and actually forming new synapses in my brain while doing so.

Practicing self-expression is practicing self-love. Through movement, I realized how the fear I was carrying around – scared to fit in and be the same, yet scared to be too different and not fit in at all – was stopping me from feeling more love. I let that fear go.

Everyone dances their own dance – during ecstatic dance and during everyday life. It felt good to break down the barrier of judgment that I had created for myself. It felt good to truly dance like no one was watching.