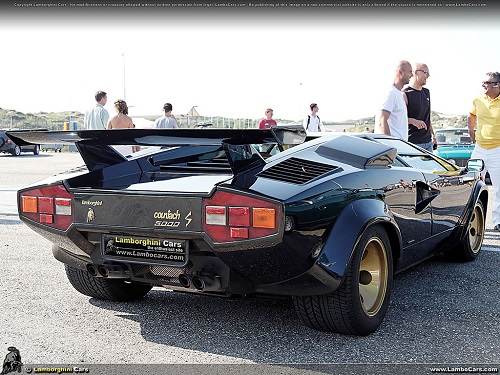 When I was twelve, I remembered that I was obsessed about the idea of earning money. I already knew that money had power, even though my parents never flashed it.

I don’t know where this intoxicating affair with money came from, maybe a past life, but whatever it was – I loved money, a $5 dollar weekly allowance didn’t lower my sights either.

I tried selling crystal-looking rocks to my neighbor who I thought was a wealthy old lady, and thought of other ways to make money.

My dad was big into cars and read “Hemmings” every week, a big brown catalog featuring exotic cars for sale all over the world.

My favorite car at the time was the Lamborghini Countach and our neighbors had a Lamborghini Espada, a much cheaper version of a Lamborghini but it still had a V-12, which was the point of owning a Lamborghini in the first place!

So, my little brain went to work on how I could wheel and deal Lamborghinis.

I found a way to post an ad on Hemmings to sell a Lamborghini and make a serious profit.

Then I found a Lamborghini for sale and found a buyer for that Lamborghini.

I basically was a middle man and didn’t know it.

I didn’t have the car or anything, but I paired two people together and thought I would make $50k from the transaction.

Then, the person who wanted the Lamborghini called my dad asking about the car.

My dad got the biggest kick in his life when he found out that I was selling a Lamborghini I didn’t have on Hemmings!

I wasn’t grounded or anything. My dad simply told the guy that it was sold.

So, that was my first real taste of money and Entrepreneurship.

Later on I wanted to be a rockstar drummer and was ready to go to a music school in Hollywood, if I graduated high school.

In a twisted way, I’m glad I quit school to become a couch surfer, doing drugs, because if I went to Hollywood to play music I surely would have found more serious drugs, like Heroin and Cocaine.

After decades of looking for a serious profession, without having a fancy degree, I discovered network marketing was the best business model. For literally $200 a month, I had a chance to make six figures a year or more.

From going to art school, the merchant marines, to modeling, to driving eighteen wheelers, my true vehicle of wealth came back around to network marketing.

Now I make enough money to buy the lamborghini for real. . .

Whatever you have your heart set on doing, go for it.

There will be a couple years of hardship, but it will start to take off if you have the right idea matched with the right amount of passion.

I believe in you!

I became a drunk and had a heart-attack when I was 32 and almost lost that inner-spark completely to go after my dreams, but I climbed through the dark tunnel, just like you can, and it will all be worth it.

You’ll even forget about the hardships you had once the money starts flowing in.

Visit About Erik for the Best Online Business Opportunity