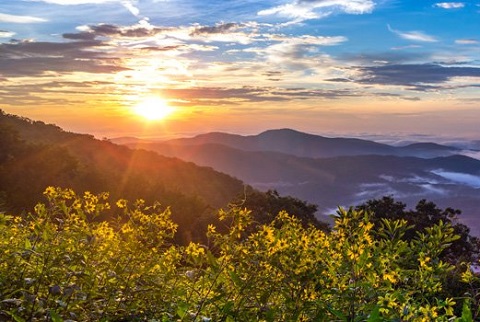 My wife and I just moved to North Carolina, by the Smokies. There’s no neighbors and it feels like we’re camping every day.

But, something strange is happening – it’s like nature is resetting me back to a healthy adult.

I have an addictive personality and was a drunk for 16 years. I was very close to homeless and had a alcohol-related heart-attack when I was 32.

Then, when I finally got sober a few years ago, I had a panic attack around my parents.

Stuff that I had been running from for years began to surface and came out as a panic attack in front of my dad – so, now I was scared of being around my parents – then that spread to being scared of everyone.

Fast forward a few years of being scared of people, hiding at home, and eating sugar and getting fat.

I was starting to get worse and some would call that a “dry drunk.”

I hadn’t gone to AA meetings since I was around 25, so I was just doing this on my own.

I was starting to snap at my wife and felt bad everytime I partook in old addictive behavior.

When we moved to the middle of nowhere in North Carolina, I sat still for the first time in decades. I listened to the creek and the wind blowing through the trees.

There was no TV in the background, music, or any other type of escape.

It was just me and nature, and something happened. . .

I started to become whole again.

It’s hard to describe but I felt like I was finely becoming a man and my mind was still.

I never felt like a man, even though I’m almost 46. I always felt like a punk, who lived in a converted school bus.

But, we sold the bus after been living in one for 20 years, so that helped one aspect of me growing up.

But, nature is the best treatment center I have attended.

You don’t need to spend thousands of dollars on some fancy retreat overlooking a canyon. You can simply go on extended camping trips or rent or buy a home with acerage and a creek.

There’s a lot of indian spirits here and I call in my ancestors, thank the plant people and the stone people, like the Shamans do, and that seems to plug me into a spiritual force that is very healing.

Of course, I’m not saying to go camping right after tyou quit drugs and alcohol, especially if your body is physically dependent on them.

Seek medical help first, get a sober camping buddy, and go out into the woods.

I feel like i’ve grown here the fastest, but it wasn’t just nature’s power, it was my willingness to really let go and let God.

I have been using my “will” to drive my life into a big ditch.

My ego is not my friend and I am now truly ready to unravel the boy, the punk, and become a grounded man and nature is my ally.

I hope this helps!

We have the power within us to access healing power.