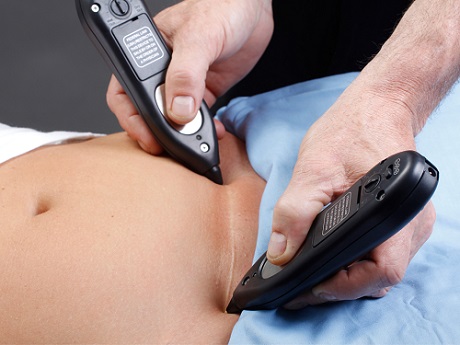 Well, MPS Therapy is the result of a form of Direct Current (DC) Microcurrent stimulation.  We’ll get into what those terms mean and how they’re applicable later on.

In MPS, the therapist uses either one or two units called the Dolphin Neurostim on your body, individually or simultaneously.  To give you a picture, the Dolphin units are essentially electric stimulation coming out of a pen point.

If the therapist is using one unit, the Dolphin is simply pushing electricity into your body at the point of contact.  If two units are being used, one unit can actually push to the other.  Later on I will discuss something called “opening channels” with the Dolphins.  That is how it is done.

So, what is the benefit of the electricity coming through the pen point vs. the common method of a 2in x 2in pad?  The theory actually has its roots in physics.

Every time you double the area of the source, you have to quadruple the voltage you are using to maintain the same power.

By utilizing the small point as the source the effect of the electrical current is maximized.  Now, you might be thinking along the lines of “with such a small surface area, how can you be sure you are doing it in the proper spot?  There must be a lot of room for error.”

Here’s my favorite aspect of the Dolphin Neurostim units: the units themselves are able to measure the resistance of the skin.  Our bodies are constantly changing and adapting to varying circumstances.

An interesting fact about our bodies is that our tissues actually change their resistance in response to a number of scenarios, including their own state of health.

Diseased or injured tissue actually maintains a lower resistance than healthy tissue.  It is almost like our bodies are asking for help.

So, as the practitioner moves the Dolphin around, it is constantly measuring resistance and relaying the information via sound.  When it transmits a higher pitch, that means lower resistance.

When the resistance is really low, the pitch is very high and a light on the device turns off, enabling the practitioner to pinpoint where to work.  Oh, acupuncture points also maintain a lower resistance.  You will see why this is important a little later.

Here are what I deem to be the top three benefits of MPS Therapy:

In my practice, I utilize multiple techniques to release or break up scar tissue.  I’ve never seen something have such a profound positive effect on scar tissue as MPS Therapy.

I was bought in at the course when the instructor asked the attendees if anyone has trouble touching their toes.  An elderly woman, who is still a practice physical therapist, raised her hand and was brought to the front.  When asked to touch her toes, I don’t think her finger tips got much past her knee caps.  She attributed her lack of mobility to old age.

The instructor asked her if she’s had any surgeries, and was not surprised when the lady informed her that she had multiple abdominal surgeries.

After a quick few minutes utilizing MPS Therapy solely on the surgical scars, the woman was asked to try to touch her toes again.  Just by seeing the looks on all of our faces, one could tell what had just happened.  Although she didn’t quite get to her toes, she was now just a couple of inches shy.

The effect scars can have on the body is commonly overlooked.  Those things can wreak havoc far beyond the cosmetic side.

Healthy skin is negatively polarized.  Scar tissue either has no charge or is positively polarized.  This discrepancy prevents your skin from transmitting information, and both electrical and chemical signals across the scar.  This causes a negative effect not only in the area, but throughout the whole body as a result.

What MPS Therapy does for this is reverse the polarity of the scar tissue back to negative.  It achieves this by utilizing a Dolphin unit on both sides of the scar simultaneously, bouncing negative charge back and forth across the scar.  Change in the tissue is seen almost instantly.  The more you have it done, the better the result.  It can also positively effect the visual aspects of the scar.

MPS Therapy works with all types of pain: acute pain, chronic pain, and pain from just about any source.  Pain is often the result of nervous system imbalances, that is, between the sympathetic and parasympathetic branches of the autonomic nervous system.

The result of modern society is a constant upregulation of the sympathetic nervous system.  That’s the fight-or-flight side, by the way.  Ideally, we should be spending most of our time in the parasympathetic state.  MPS Therapy brings a downregulation of the fight or flight response.

Another common form of pain results from nerve impingement or entrapment, especially at the exit from the spinal column.

MPS Therapy has specific protocols to address this, passing electricity through the gaps between the vertebrae, bringing them back to their proper alignment and spacing.  MPS Therapists are taught a series of steps to use in all pain cases.  The spine protocol is one of the steps, utilized in every case.

And if you come across something that actually isn’t in there, MPS therapists are taught how to handle all types of cases, regardless.  So, there’s always a way to pain-free with MPS Therapy.

Remember earlier when I mentioned that acupuncture points show lower resistance?  Well, the Dolphin units find acupuncture points, too, and MPS Therapy builds off of the tenants of the Traditional Chinese Medicine (TCM) art.

The Dolphin units are like heat-seeking (resistance-seeking) acupuncture needles, so to speak.  I believe MPS Therapy is more effective than acupuncture, however.  This is for a few reasons.

First, one of the prime ideologies behind TCM is your body’s energy.  By puncturing the skin, you are allowing the release, or loss, of energy from your body.  The Dolphin units do not puncture the skin.

Secondly, electric acupuncture has been found to be more effective than traditional needling.  Third, with the Dolphin units you have the option to downregulate or upregulate.

Lastly, working off a point I mentioned toward the beginning of the article, you can work on two different parts of the same channel simultaneously, and pass current through.  You can unblock a whole channel that way, potentially by just working two points along it, rather than every point of the channel.

Microcurrent Point Stimulation Therapy is very powerful and can be a great addition to any treatment or therapy that one is currently undergoing.

A really cool aspect of it is that if you want to learn how to use MPS Therapy and the Dolphin Neurostim units on yourself, or maybe family members, you can!  You don’t need any credentials to attend a course and have access to the units and all of the protocols.  But, please check with your state’s laws before using it on others. 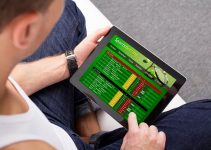