Home
Everything Entrepreneur
5 Lessons Learned From A Gender Equality Walk 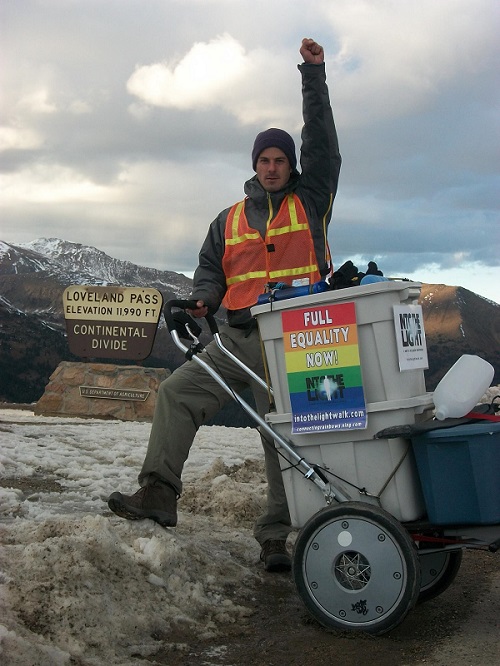 I met countless people – on the side of the road, in their homes, at community centers, at places of worship, to name a few such places.

The message I carried with me was simple. It is time for full federal equality for TBLGQ people. I put the ‘t’ for transgender first because it is my belief that people are first discriminated against based on their physical appearance.

Because there are so many rigid ideas of gender identity, transgender individuals and those who do not conform to these oppressive standards are at the front of the line for hate against them.

While I walked, I experienced many life lessons. For those considering a long distance peregrination or for those just curious about what a cross continental walk is all about, I have whittled down my many life lessons that I learned along the journey to my top five things I learned while walking across the USA for gender and sexual orientation equality. Here we go…

I can not stress this enough. Someone told me before I started walking to wear shoes that are tight fitting. That person was horribly misinformed.

My first pair of sneakers were my worst for this reason. My subsequent pairs from pair two to eighteen were ones that had good traction and a mesh upper.

My feet thanked me each of the 20 million-plus steps that remained. Not too tight, not too loose, breathable, for road walking (which is what I was doing), this is the way to go.

Two – Expect the unexpected, because it will happen every day

When you take on a journey like this, you are literally stepping out of society and the world as you know it. I was walking in and out of other’s lives and in and out of terrain unfamiliar to me.

And though my route was pre planned, there was no real way to prepare for what would happen along the way. I could not expect when an alligator would stop me in my tracks.

Or when a person would cause me to freeze while walking at night by stopping their truck near me and yelling out on a deserted road, “What you doin’ homo?”

There was no way to prepare for the guy you meet under a bridge, where he lives with his pet rattle snake and dog, when you are setting up your tent there for the night.

You may start a day simply and end it at the graveside of a transgender person, there with their parents memorializing them, a recent victim of suicide, funeral flowers across the ground, only halfway wilting.

I learned this important lesson over 2,000 miles into my journey. I was walking through central Texas one day when a police officer drove up from behind and stopped me.

After I answered his questions about what I was doing he informed me that Texas law states that when you are walking on a road, you must walk against traffic. I was skeptical so I asked him to show me where the law was written.

He went to his car and pulled out a substantial book, the Texas law book. He took the time to find the law and handed me the book. I was shocked. For some reason I thought that if I was walking with traffic I would be at less risk, like people would see me and avoid me.

I crossed the street and began walking against traffic as he left. It took no more than one minute for me to see the error of my ways. People were swerving all over the road, looking at their cell phones. In that instant I came to the belief that none of us should be allowed to drive!… EVER!

Four – That rock is good

It was a typical rainy day in the Pacific Northwest, only a few hundred miles into my walk, that I hit the one and only moment where I said to myself, “What the hell are you doing! You can just quit at anytime.” But I was out there. I was committed to this crazy idea of walking for a cause.

This internal negotiation played out as I slogged along over rolling hills, humid, hot, exhausted. I looked to the woods beside me and noticed a rock I was walking past. A voice inside broke through my thoughts with, “That rock is good.” I looked around to other parts of the landscape. The voice grew stronger. “That log is good. That grass is good. That tree is good.”

I didn’t have it in me to call any of these things great. Good was as good as it got. But it was enough. I knew that I was not going to make it if I dwelled on all of the horrible parts of what I was doing. Within an hour, I was strolling along over the hills, in the rain, content with my reality.

From time to time I would pass someone, or they would be driving by and stop, curious about what I was doing. Most of the time in these situations, when I would tell people why I was walking, they would show signs of support. But not always.

When I encountered those who did not see the world the way I do, they would voice their opinions. But always, there was something in their eye that told me that they saw me.

And it appeared to me that that seeing part of them would cause them to short circuit a bit when they would parrot their talking points. It is a lot easier to discount the validity of another when they are not two feet in front of you.

As hard as it can be, it taught me that I have to find opportunities to share space with people who disagree with me, if for no other reason than to remind them that I exist. I am not an idea. And though I am going to walk away from them, I am not going away.