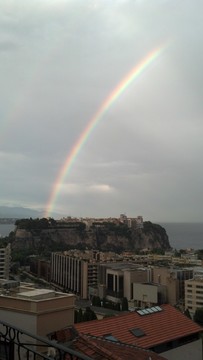 Since we had arrived in the dark of night, I had literally no idea what it would look like outside my window when I awoke the next morning.

Even though I was fighting a moderate case of jet lag, the sun shining through the open window proved to be an irresistible draw. So I mustered my strength and enthusiasm, threw off the sheets, and wandered over to the daylight flooding into the upstairs bedroom.

The view was well worth my efforts. It was a beautiful day on the French Rivera, and our rented apartment in Cap d’Ail offered a spectacular view of the Mediterranean Sea.

There was an array of sailboats and yachts, along with one lone cruise ship that had wandered in closer to land. I lingered for a while before deciding to go downstairs and see what my husband was up to. He is a good sport, and indulges my wanderlust.

Unlike my first husband (God rest his soul) who hated airline travel, my current husband is my partner in crime. I had never left North America before I met him. Now I’ve been to twelve other countries outside the USA, and counting.

On this particular trip, we decided that we wanted to see “how the other half lives.” I’ve always held a certain fascination for the lifestyles of the rich and famous. And now that I am retired, and financially sound, I finally have the chance to take a little taste of what it might be like to live “la belle vie.” Monaco seemed the logical place to look.

We’ve watched the Monaco Grand Prix a number of times on television, and knew to expect multi-million dollar luxury yachts floating in Port Hercules and a densely packed city.

There are nearly 40,000 residents living in Monaco, on a piece of land smaller than New York’s Central Park. Plus about that same number of people commute into Monaco daily for work, which makes for a highly congested place.

The population density aside, Monaco is one of the richest countries in the world. It is estimated that nearly a third of the residents there are millionaires.

It’s understandable that the ultra-wealthy would be drawn to this place. They have a mild Mediterranean climate, an insanely low crime rate (e.g., one murder every ten years), picturesque views, and last but not least – no personal income tax. What’s not to love?

Since we wanted to get a real feel for what it would be like to live there, we opted to rent an apartment through Trip Advisor, rather than stay in a hotel with the rest of the tourists.

The availability at our price point in Monaco itself was somewhat lacking, so we found a place in Cap d’Ail, which is Monaco-adjacent. It was a modest one bedroom, two-floor apartment with a fully-stocked kitchen and its own private balcony that looked out over the water.

We got a pretty good deal since we stayed in a summer month. The little portable air conditioner they provided made it almost bearable during the heat of the day. But we weren’t there to just sit around the apartment. We were there to experience and explore.

Additionally, the local drivers are aggressive to say the least, even the hundreds who drive around on scooters. We found that walking or taking the bus were better options for the most part. At least in the city.

We went all over in the two weeks that we were there. We ate in restaurants, shopped at La Condamine, and of course visited the famous Casino Monte-Carlo where we used a free spin bonus. After the casino gambling we saw a lot of fellow tourists, shop keepers, shopping clerks, and other workers. But where were all the rich and famous people?

Then one day as we were eating lunch at the Riviera Marriott Hotel La Porte de Monaco. They have an outdoor terrace at their restaurant, Le Cap, which is only a few feet from the harbor.

The food was not exceptional, but the service was excellent and the view was outstanding. As we enjoyed our meal, a beautiful and expensive yacht came in and docked. Finally, a front row seat for watching a multi-millionaire in action.

I don’t know exactly what I was expecting, but what I witnessed made a lasting impression on me. The owner of the yacht barely waited for his craft to stop moving before he swaggered down the boarding ramp. He was wearing boat shoes, long pants, a crisply ironed white shirt that was unbuttoned at the collar, and Prada sunglasses.

He was on his cell phone the entire time he departed his boat. He didn’t notice me staring in his direction, but I imagine that he’s probably used to that. Still on his phone, he walked directly to his Maserati, which was conveniently parked within a few feet of the dock.

Without looking back at his crew, who I assume would be there until either he returned, or until they had taken care of cleaning up and locking down, he glided out of his spot and sped off into the distance.

Then it hit me. The millionaires of Monaco live in their own bubble. The only time they come close to the unwashed masses is to transition from one status symbol to the next.

They are accustomed to the ultimate conveniences (e.g., private parking within feet of their yacht, a staff to take care of all the mundane details of life, etc.). and live in a place where they can flaunt their wealth without looking over their shoulder.

There really are two kinds of people here: the “haves” and the “have nots.” What I learned in that moment of watching one of the “haves” in action was just how unreal that type of life would be. Perhaps it’s just a case of sour grapes, but I don’t think I would enjoy that lifestyle. It seems artificial to me.

We finished our meal, and walked back to our apartment for an evening of watching the BBC. But that image lingered in my mind, as it has ever since. I wonder if that millionaire is happy.

I wonder if he has ever struggled at anything in his life. I wonder if he is truly as self-absorbed as he appeared in those brief moments that I observed him, or if he lets his hair down around his (presumably rich) friends? I will never know. But I’m no longer that anxious to find out.