Home
Everything Entrepreneur
Want to Boost Productivity? Put CBD in Your Coffee 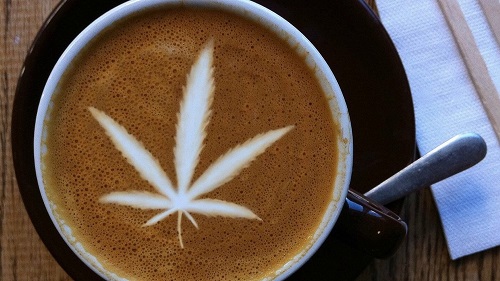 How do you guarantee productivity in the morning? A good night’s sleep, a fresh cup of coffee, and a healthy breakfast? These tried and true parts of your routine are a great start, but it’s time to kickstart your productivity into overdrive with one of the hottest trends for entrepreneurs: CBD-infused coffee.

You read that right. More and more coffee brands are starting to add CBD-infused blends into their repertoire. Entrepreneurs are finding that this type of coffee can actually help to boost productivity and keep you more alert throughout the day.

Even though CBD and coffee is a new trend that is leaving some people scratching their heads, CBD’s medicinal purposes have made it a key element of food and drink since the beginning of civilization.

History of CBD in Food

CBD oil isn’t just found in coffee. Foodies and CBD fans can get the oil infused into a variety of recipes, including cookies and other sweets.

Adding CBD to food and drink has certainly taken off in the last few years with the movement to legalize cannabis, but the practice of using CBD in food or medicine is far from new. In fact, it’s one of humankind’s oldest traditions and plays a big role in the development of agriculture.

The first known cannabis plants date back to the Ice Age. It’s been around since the birth of agriculture over 12,000 years ago. Archaeologists have found evidence that cannabis has been used in food over 8,000 years ago.

Ancient Chinese healers, including Shen-Nung (“The Father of Chinese Medicine,”) believed that hemp plants balanced out the body’s energy.

They used hemp to treat conditions including constipation, malaria, rheumatism, and even “absent mindedness.” Chinese surgeons also mixed cannabis plants with wine to create an anesthesia.

The popularity and known benefits of cannabis were spread throughout the globe, even hitting North America in the colonial age. The plant was so useful to make things like ropes and fibers that it was illegal not to grow hemp in early colonies.

Unfortunately, the past decades have criminalized the plant through confusion and misunderstanding. But as doctors, scientists, and influencers begin to preach the benefits of hemp and CBD, the plant is starting to become popular and influential once again.

The Difference Between Marijuana and Hemp

Even if marijuana is legal in your state, the idea of adding weed to your coffee can be a little odd, or even counterproductive.

Don’t worry. You’re not going to get stoned at the office from drinking CBD-infused coffee. Marijuana is actually quite different than hemp, the plant which CBD comes from.

Hemp and marijuana are similar, but not identical. Both plants come the cannabis family. The different lies in the amount of THC in each plant. THC is the chemical that gets you stoned.

Marijuana has a high level of THC, starting at 5% but going all the way up to 35%. Hemp, meanwhile, barely has any THC in it; you won’t find more than .03% THC in hemp plants or CBD oil. The high THC content in marijuana makes it a psychoactive plant, but these qualities are not found in hemp.

CBD oil doesn’t have notable levels of THC, and the chemical makeup of this oil can do the opposite of getting you stoned; it keeps you active, productive, and in a great mood throughout the day.

Back in the 1970s, the “War on Drugs” placed harsh laws on all cannabis plants. This included marijuana, but accidentally also included a list of cannabis plants that aren’t drugs and can’t get you high.

Despite pushback from the federal government, more and more people are starting to catch on to the benefits of CBD oil and hemp, and we may see more widespread legalization in the future.

The Benefits of CBD

Drinking coffee throughout the day can be a risky game. Without a coffee in the morning, you feel groggy and sluggish.

Caffeine withdrawal may also cause headaches. Too many coffees, however, can bring on feelings of anxiety or jitters. It’s hard to stay productive when your hands are shaking.

Luckily, CBD acts as way to balance caffeine and reduce anxiety. You will still stay alert and awake, but you won’t have the jitters to go along with your energy.

Entrepreneurs and other individuals with chronic pain have found that small doses of CBD oil can help to relieve their symptoms and go throughout their day without any pain. From achy muscles to arthritis, CBD oil can tackle painful symptoms that get in the way of being productive.

Less pain and less anxiety allows for more focus, happiness, and an overall better quality of life. Think about how that first sip of a fresh cup of coffee feels in the morning, and then turn the dial up even more.

CBD in your coffee, food, or consumed on its own has helped many people approach life with extra pep in their step and less stress.

Where To Get CBD Coffee

CBD oil can be purchased on its own, but popping a few drops of the oil into your coffee isn’t going to be very delicious. When coffee roasters make CBD-infused coffee, they carefully infuse the CBD oil and the natural oils of the coffee.

The CBD is added during the roasting and grinding process. Rather than trying to craft your own blend, leave it to the experts and buy a roast that already has CBD.

CBD-infused coffee is hardly a staple of most coffee shops, but it’s not impossible to find. A handful of coffee companies offer a CBD-infused blend, but be sure to read reviews and try a sample before you invest.

Grab a cup of CBD-infused joe and enjoy the benefits from the misunderstood, but highly beneficial hemp plant.

Erik Christian Johnson is a full-time blogger, self-development advocate, and full-time network marketing Entrepreneur. All articles are solely used for educational purposes and merely the opinion of the blog writers. Please refer to the Disclaimer page for full disclosure. There might be affiliate links within articles.

This site uses Akismet to reduce spam. Learn how your comment data is processed.

Join Our #1 MLM Opportunity for Free!