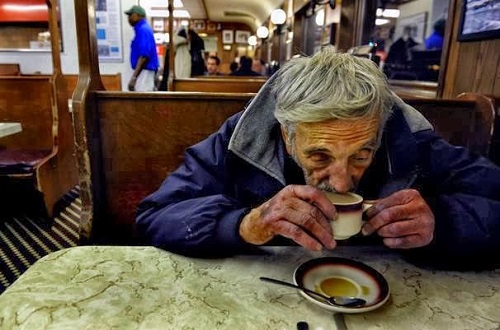 Before I finally succumbed to the fact that I was indeed a full-blown alcoholic of the desperate variety, I had a pretty poor idea of what AA was.

To me, it seemed like a cult. The few meetings I had been to were in shady parts of town, with shady people, in rooms that smelled like stale smoke and cheap coffee.

All I could think of when I thought of going to AA was a bunch of old men sitting around talking about how they’d lost their wives, kids and jobs. Surely, I don’t have anything in common with these people — do I?

After a night on the couch watching This Is Us (the episode where Jack dies, which would make a nun drink), taking shots of Triple Sec (yack), and reading a letter my dad wrote to me before he died (balling my eyes out), I realized drinking wasn’t fun anymore. I told myself the next day I would give this whole AA thing one more try.

“Meetings without a sponsor is just coffee and bullshit.” — Chad (Anonymous AA Member)

I learned very early on in AA that those who just go to meetings but don’t actually work the program with a sponsor have a very low chance of staying sober long-term.

We call these people “dry drunks”. They walk around with white knuckles, stark-raving sober. They’re those AA’s we see that hit a lot of meetings, drink a shit ton of coffee and smoke insane amounts of cigarettes, but have never opened up a Big Book and refuse to work the steps. They’ll tell you they don’t need a sponsor, that they can do it all by their lonesome selves.

Then there are those we see in AA that have this special twinkle in their eyes. They’re usually the ones we hear speaking the most and who just seem to have it all figured out. Everything that comes out of their mouth is pure gold.

Another friend in AA said that early on in sobriety his sponsor told him to start interviewing members of AA who were considered “chronic relapsers”. Sponsors for those of you who don’t know, have a tendency to make some pretty absurd requests that most sponsees balk at only to later find themselves amazed upon completed the ridiculous task.

Nevertheless, this friend, we’ll call him Fred (whose now 30 years sober), said that after asking what led to their relapse, nearly 90 percent admitted that they either stopped going to meetings or never completed a fourth and fifth step with a sponsor. The Big Book of Alcoholics Anonymous tells us in Step Five that newcomers who fail to work a thorough Step Four and Five will “almost invariably get drunk”.

The point I’m trying to bring home here is that going to meetings and trading in a lethal alcohol problem for a caffeine or cigarette addiction (usually both), will most likely lead to a relapse. At the very least it will make you a miserable human to be around, perhaps more so than when you were actively drinking.

Here’s a riddle for you. What do you get when you take “alcohol” out of “alcoholic”. The answer is, IC. That’s right, when us drunks stop practicing our addiction, we are still left with those icky causes and conditions that led us to drink in the first place. Simply getting your ass in a chair at a meeting is not going to remedy deep-rooted character defects. In true AA fashion, I’ll use myself as an example.

When I finally got myself a sponsor, admitted I was powerless over alcohol and that my life had become unmanageable; believed that a power greater than myself could restore me to sanity (although I was probably never sane); and, made a decision to turn my will and my life over to the care of God as I understood him, I felt great.

The obsession to drink was immediately lifted. I was sitting on a pretty pink cloud. Then my sponsor told me I was ready for Step Four and Five, which I knew were notoriously not easy yet supposedly totally worth it.

It took me two weeks to start writing anything. During these two weeks I was an irritable, moody, whiny — baby. I would later find out these were my three character defects screaming to be acknowledged — perfectionism, pride and control.

Considering the fact that spilling a drop of coffee on my shirt would send me into a bitchy tail spin, these personality flaws did not come as a surprise. I just never realized how they had anything to do with my drinking problem.

I had no idea what the hell was wrong with me! In hindsight, I can see why people run for the hills when they have to take a real look in the mirror for the first time, in what I can only assume has been a long time.

I won’t lie, there is nothing fun about talking about resentments and relationships in which you were the key problem. It’s not fun telling another human being all the fucked up, crazy shit you’ve done while drinking.

However — and that’s a heavy however — I can now see why Step Four and Five are absolutely necessary. The freedom I experienced and the self-esteem I have after walking through these pesky steps is totally worth it.

Coming from somebody who thought all AA consisted of was a bunch of creepy old men sitting around drinking shitty coffee out of Styrofoam cups, excited about how they aren’t living on the streets anymore, I’d say that’s a pretty profound statement.

I’ve had bouts of sobriety throughout my 15-year drinking career; six months here, eight months there. And although I’m only three months sober now, the difference between working the steps of AA and just going to a few AA meetings is like night and day. Alcoholics Anonymous gave me my life back. I see the promises coming true in my life on a daily basis, and not in small ways.

When at the end of every meeting we say, “It works if you work it” — we mean it. If not, AA is really just coffee and bullshit.